Debating on whether to go to the Manchester Christmas Markets?

It was a crisp Wednesday when my friend (Callum) and I decided to venture to the Manchester Christmas Markets. I tend to go every year when they come to Manchester, seen as I live near the city.

They always get me in the Christmas spirit and you can’t forget the food. The atmosphere is always lovely and Manchester comes alive at this time of year. There are nearly 350 stalls this year so it is hard to not be tempted.

Going during the day is always a good idea; they become awfully busy at night with people leaving work and going for a drink. I would never think of even trying them on the weekend… done that before and it isn’t nice.

If you want to avoid queues, have space to actually look at stalls and enjoy them as much as you can, then I suggest sometime during the day. 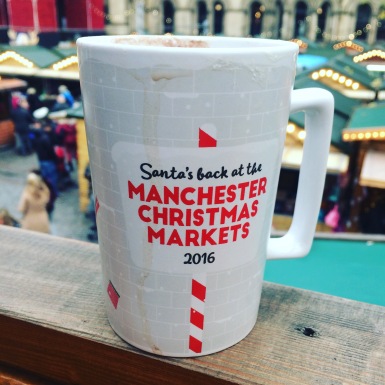 As expected, they weren’t that busy and it felt extremely festive. I always love a good hot chocolate at the markets and I’m a fan of keeping the mug (you pay a £2 deposit and get it back if you take the mug back). Come on, when will you
get a Manchester 2016 Christmas Markets mug again?

I opted to go for a Baileys Hot Chocolate, which always tastes likes Christmas which came to £6. They put whipped cream on the top and the mug this year was pretty cute.

They had hot mulled wine, hot cider, any kind of liquor in hot chocolate and other drinks. There is usually something for everyone to find.

Whilst drinking my hot chocolate, we decided to take a look around. There is the usual set of stalls: food, more food, alcohol, and lots of unique gifts to buy. The chocolate covered fruit stall is always a hit with everyone along with the pop up beer tents.

Get an idea of what is on offer from the list of stalls from last year.

Sometimes, it is nice to stop and soak up the atmosphere of the markets. So, we decided to head to the balcony of one of the beer tents and look over. Many people will be sitting there having a good time and you can see everyone enjoying their time at the markets. 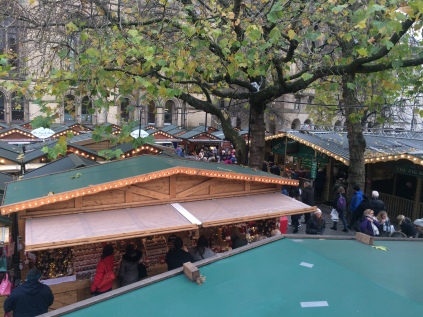 The smells from the stalls are lovely and the Christmas music playing just gets you in the swing. They sell alcohol in and non-alcohol hot drinks and cold drinks in every one of the refreshment ‘huts’… not too sure what to call them?

Every stall is quite unique to the other and has lots of interesting items. One of interest to me is always the wooly items, but unfortunately, this year, they didn’t have the hats I like.

The great thing about the markets is it doesn’t cost a thing to enter; you only pay for what you buy. So it can be a great experience which is pretty cheap- a fun day out for everyone involved.

After some time people watching, we decided to continue looking around. The food at the markets is so tempting and unfortunately I gave into temptation. 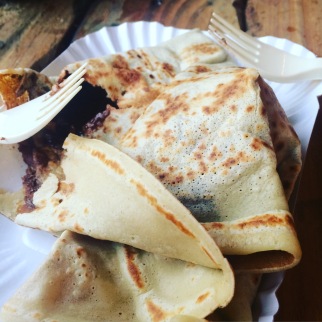 I always love the crepes they serve and this year I went for a Nutella and banana crepe. They warm you up instantly and they’re so filling. I don’t remember it being too expensive for what it was. They also have mini crepes and donuts, so there is a wide variety of sweet food for those of us with a sweet tooth.

We continued to ponder the markets for a while and look at the various items.

Callum picked up some kind of almonds and ginger cinnamon cake, which tastes divine, after we had received many samples of cake and cookies from the persistent and cheery man on the stall.

The great thing about the markets is how huge they are. Many people forget that they wind down other streets and cover many areas of Manchester, which is great if you want to look around Manchester after.

It was a little later when we decided to leave the markets to look at shops in the Arndale. However, we were distracted by the idea of cocktails at The Alchemist so headed to Spinningfields.

Alchemist is known for it’s array of wacky and weird mixtures, and that is the attraction to many people. The Winter cocktail menu had appeared so I decided to try something off it. There is so many different drinks to pick from, and the menu is pretty large, but I finally settled on one. 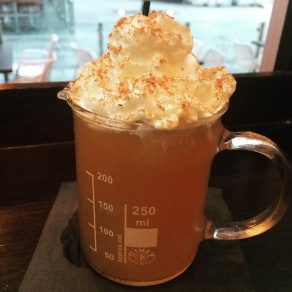 I picked the Winter Rum Punch created with Appleton Signature Rum, Amaretto, Apple, Lime and White Chocolate Foam. They finished it off in a measuring jug. It tasted amazing, but I wouldn’t suggest it someone who prefers sweeter drinks.

Callum opted for the Snow Joke which contained Reyka Vodka, Apple, Lime and White Chocolate. A cinnamon stick was added to Callum’s and placed in a nicely patterned long glass.

After finishing our cocktails, we decided to go shopping for a little while. We were pretty tired from the day but had thoroughly enjoyed ourselves. The markets were a great experience and created the Christmas feeling.

I would thoroughly suggest them to someone with a free day. They are a great day out for anyone and will be enjoyed by all ages.

They are always one of the highlights of the year and need to be done.

Until next time, folks.