“One of the penalties of refusing to participate in politics is that you end up being governed by your inferiors” – Plato.

Voting is something I’ve always found close to my heart. I believe that everyone should exercise their right to vote. Something I’m especially passionate about is young people using their vote.

To discuss this topic today, I’ve teamed up with Voting Counts. I’m not going to tell you WHO to vote for, or WHY you should vote for a certain party. This is going be a 100% unbiased article on why young people need to use their vote. 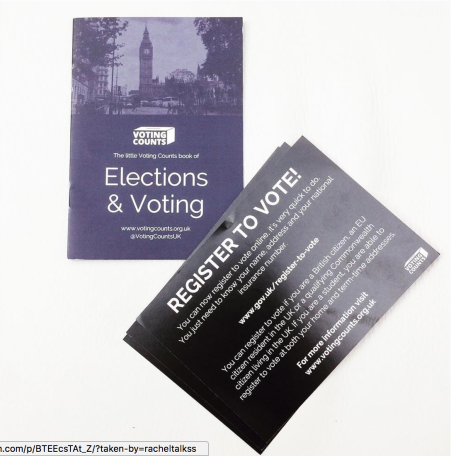 Unfortunately, the General Election saw just 45% of 18-24 year olds vote, compared to 70% of over 65s. That means there was probably huge separation between who could have won and who did win. The young people really have the chance to swing the vote to whoever they want to win. Again, only 64% of us voted in the EU referendum as opposed to the 90% of 65+.

We need to increase our turn out to polls, immediately.

There are various reasons to vote, and there are very little reasons as to why you can’t (physically mainly) vote. Unless you’re dying, severely ill, trapped on a deserted island or caught by dragons- you can vote. And, you may live 500 miles from a polling station (unlikely), but you can vote by post.

The lame excuses used by young people are NO LONGER acceptable.

How do we expect to be taken seriously by politicians if we can’t turn out to vote in our masses? Also, you can’t complain about who is elected if you don’t vote. It’s a two way street, you make the effort.

One student, Ele Fisher, has provided her reason (as a young person) why she believes voting is important:

“As a woman, people died for my right to a vote so I’m going to express my gratitude through voting. It gives people a voice – a chance to be heard. Some people don’t even have that right. By voting it makes sure my voice is heard and I can affect my future. If no one voted it’d be a dictatorship and the views of the majority would be left in the hands of elites, which is unrepresentative of society”- Ele Fisher, April 2017.

Honestly, voting is such a simple process. We live in a democratic society and the government make voting perfectly accessible for many people. Sure, there are probably accessibility issues, but there is always help at hand. You just visit here to register to vote.

If you’re reason is that you *hate* politics, then find a way to become interested in politics. Find out WHY you hate politics, and try to understand that no matter what you think- politics is what governs our country and the place you grow up in. If you don’t have a party you want to support, then go to blank voting. Simply put, you leave your ballot blank and send a message to the government. You’ve still voted, but they will see there may be a flaw in the place you live.

The General Election on 8th June will be a very important one, and, trust me, you don’t want to miss this one.

I’m not here to tell you how to vote, I’m here to tell you that you should vote. As young people, we have a responsibility to provide our views and express who we want to run the country. It takes less than 10 minutes to register and it is one day every 5 years.

Show the country that young people are engaged, politically active and ready to become the generation who makes a difference in the UK.

Take a look around you, the world is still spinning, it won’t stop.

Thanks to Voting Counts for providing me with some useful information! I hope this article is informative and many more will follow.