And this time, it wasn’t me thinking ‘oh f*ck’.

Okay, maybe I was… I had a great relationship with this person, and now they probably think all kinds of things about me. Now, they know I’m a feminist.

Today, I turn my attention to something that I probably hardly discuss on this blog. Many people know me to be pretty outspoken about my views. I tend to voice my disagreements or speak up if something isn’t right. I have gained this approach to life over the past couple of years. I was sick of taking a passive view at the world, and not saying anything about it.

Sometimes, when I mention I’m a feminist, I think I may as well say I punch puppies for a living. People look at me as if I’m going to burn their house down, smash their windows… and, my favourite of all, burn my bra in front of them, (would I hell do that, Victoria’s Secret ain’t cheap).

Calling yourself a feminist isn’t the easiest during this time of Tumblr rants (that tend to defer from the actual point of feminism) and the belief that feminism means women are better than men. For a few weeks, I experimented with ‘Feminist’ on a Tinder bio, to see what would come of it. The fact I had to remove it probably says a lot about how it went down. Many people were interested in calling me names, unlatching me because of what they saw in my bio. It was quite interesting to say the least. However, most of them had this image of feminism that is completely wrong. So construed and changed by people who can’t educate themselves on feminism before calling themselves one. Half of us feminists are trying to clean up the mess that gets left by what people believe counts as ‘feminism’. 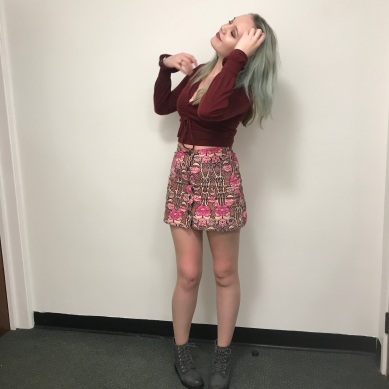 I am outright sick and tired of people saying I must hate men because I’m a feminist. In fact, there are many men who I know that I admire and have much appreciation for. I can’t stand the image that I think women should have more rights than men, or that I feel oppressed because a man sat too close to me on the train. Feminism is none of these things that are thrown around in society. I am not going to call you misogynistic because you’re a man, and you accidentally knocked into me. I’d probably say sorry, not try to tackle you to the ground and rant at you.

There are many times I haven’t mentioned I’m a feminist because I am scared of reactions. I feel that it creates this image of me before people even understand who I am as a person. I feel sad that I even have bring my feminism with a disclaimer of ‘No, I don’t hate all men. I’m not going to force my views on you. I love my bra‘. I feel sad that there are still so many issues in the world that feminism considers, but people just don’t see this because of this image that already exists. I don’t even think I can stress how heart wrenching it is when someone won’t even listen to your views, or your ideas of equality because of the tarnished label that feminism already has.

In the past, I have spoken to many feminist friends who feel the exact same way. That this image created by people who are less educated on feminism needs to be brushed away. Everyone has a different definition of feminism, but one that includes the idea of hatred and superiority isn’t what feminism stands for. People are using feminism to drive a hatred they already have, and mask it behind a movement. Though, that movement is not one that belongs to them.

Feminism is far more than people believe. I am far more interested in bigger issues in the world that are impacting women. I have an interest in equality ALL over the world.

My definition of feminism is easy.

Feminism helps to create equal rights for men and women. Feminism raises the equality of women, whilst acknowledging issues that continue to impact men in society. Feminism is for everyone, and includes everyone.

Feminists are trying to clean up the reputation we’ve already been given.

We are not doing anything wrong.